Practicing the recommended yoga asanas will first rejuvenate the body and then tackle the causes of the ailment. Yoga can help to improve and heal parts of the body that are injured, traumatised or neglected. Movement of the body in asanas stimulates injured joints, muscles or organs by increasing the flow of blood to these parts. The practice of yoga also increases the pain threshold.

The word yoga originated from the Sanskrit version of ‘Yuj’ which means to unite, to join, to harness, to yoke, to contact, or to merge. Yoga means union or reunion between soul and supreme soul or the merging of body, mind and the soul. It is the union between the individual self and the universal self or in our common lingo, we merge ourselves with the prapanjam (universe). One has to detach from the physical world or all the materialistic form in life to experience the very basic of yoga principles. Yoga is a journey of experience to meet the ultimate almighty in the universe around us and beyond our imaginations.

In India, from time of immemorial, many great sages sacrificed their entire lives to reveal the secrets of human nature and existence. They pursued this research on yoga without any expectation in return and eventually published all their results throughout India in various forms. They were so dedicated to the extent of staying in the primary jungles for years in the extreme nature facing all the challenges in the wild. Eventually, they found many secrets, mysteries and the power of the nature and the human beings and their relationships. Finally, the word yoga was found at the end of their ultimate journey and now the whole world is experiencing it for free. The word yoga eventually became so common till no one can avoid this word in their life.

Currently yoga is being practiced throughout the world to achieve success, progress, health, wealth, etc. Yoga is both a philosophy and science not only in India but also among everyone in this world because it deals with almost everything and anything. The connection between human and universe is still being a research subject among many scientists due to its perpetual benefits to all human being. Yoga is therapeutic for all and it can be practiced easily by anyone with interest and desire to achieve universal peace. Yoga, being the most ancient science of spiritual self-development, is based on the laws governing the natural forces or the life force within us towards liberation and enlightenment.

When you sit in padmasana for 15 minutes daily with closed eyes, concentrating on almighty at the lotus of the heart destroys all sins and attains Moksha quickly. This asana increases digestive fire and give good appetite, health and happiness. Padmasana removes rheumatism and keep the three humours, wind, bile and phlegm in proper proportion. They purify and strengthen the nerves of the legs and thigh. 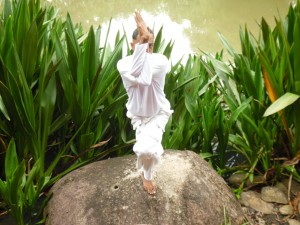 Garuda is the King of birds in Hindu mythology, translates roughly to the eagle in English. This Garudasana strengthen the shoulders, hips, thighs, calves and ankles. This asana resembles the appearance of Lord Garuda, the eagle and therefore it is called Garudasana. The whole weight of the body comes on the legs in this asana. A man may grow tall by the practice of this asana. 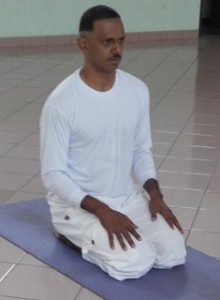 Is one of the simple pose which can be practiced after lunch or dinner or at any time of the day. Vajrasana is best for practicing breathing exercise or pranayama and meditation. The regular practice of this Vajrasana makes you stronger and healthier. It also calms the mind, cures constipation, increases digestion process, cures stomach disorder, get rid of back pain, cures urinary problems, strengthen the sexual organs, increase blood circulations, strengthen the muscles of the legs, reduce obesity and acts as pain killer to arthritis patients. In this posture, all seven chakras of the body are aligned in straight line which makes it easy for the practioner to raise kundalini (serpent) shakti and experience its movement along their spinal cord.

PRANAYAMA - THE ART OF YOGIC BREATHING

Prana is the vital energy needed by our physical, mental and subtle layers, without which the body would perish. It is what keeps us alive and active. Pranayama is the control of prana or the vital energy through the breath continuously. These techniques rely on breathing through the nostrils. Prana is also known as the life force or the vital energy required by human being to stay active and alive. On subtle levels, prana represents the pranic energy responsible for life or life force, and “ayama” means control. So pranayama is “control of breath”. One can control the rhythms of pranic energy with pranayama and achieve healthy body, mind and soul. Patanjali in his doctrine of yoga sutras mentioned pranayama as means of attaining higher states of awareness; he mentions the holding of breath as important practice of reaching Samadhi.

All is in vibration; from the tiniest atom to the greatest sun, everything is in a state of vibration. There is nothing in absolute rest in nature. A single atom deprived of vibration would wreck the universe. In incessant vibration the universal work is performed. Matter is being constantly played upon by energy and countless form and numberless varieties result, and yet even the forms and varieties are not permanent. They begin to change the moment they are created, and from them are born innumerable forms, which in turn change and give rise to newer forms, and so on and on, in infinite succession. Nothing is permanent in the world of forms, and yet the great reality is unchangeable. Forms are but appearances. They come, they go, but the reality is eternal and unchangeable. The atoms of human body are in constant vibration. Our bodies are as much subject to rhythmic laws as is the planet in its revolution around the sun. Much of the esoteric side of the Yogi/Yogini Science of Breath is based upon this known principle of nature.

In the same way the Yogi by rhythmic breathing “catches the swing”, as it were, and is able to absorb and control a greatly increased amount of prana, which is then at the disposal of his will. He can and does use it as a vehicle for sending forth thoughts to others and for attracting to him all those whose thoughts are keyed in the same vibration.

We appreciate your donation

Make a Donation »
Scroll to top